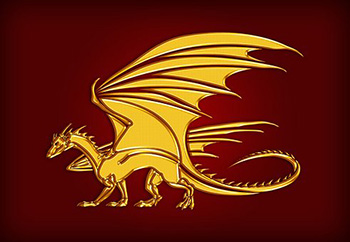 The only thing to fear is fear itself. Just keep telling yourself that, two and a half tons isn’t all that big. Dragons have an uncanny sixth sense about where you are at all times. You’ll probably trip over their tail long before they step on you.
Fire can be a problem during impression, but except for rare occasions, it’s mostly a matter of symbolism. Baby Aguivas on the other hand will teach you from experience not to stand at either end. Accidents only happen to the unwary.
Amphiteres are born angry, so consequently get up on the wrong side of the grotto every day. They want to play, and it’s a thin ploy that lets them act out their frustrations, so play with them a lot. It helps in so many ways.
A dragon will get grumpy if they’re not fed enough, but the same result happens when they’re fed too much. Either way brings out the pent up hostility in a reptile. Once every four days is a general rule of thumb, but understand, too much is worse. Dragons grow throughout their lives and the rider is the last word on how much they eat and grow.
In a Dragon’s “Holder of Things”, a container much like a metal trash can, you can often find one of their favorite toys – a Frisbee – which makes them very happy. They can be extremely child-like in many ways.
One of a Dragon’s favorite things is cherry candy and they will do pretty much whatever you want to get it.
Dragons hear your thoughts and mirror your emotions. The more stable you become, the happier your dragon will be. It’s a good recipe for both parties when the rider is on his/her game.